I landed on Mexico City on 16th of May and flew out on 22nd of October, after 160 days. The original plan was to stay for two months. I spent most of my time in 6 (/31) mexican states: Chiapas, Estado de México, Puebla, Oaxaca, Guanajuato, Mexico City. I also briefly visited Zacatecas, Michoacán and Quintana Roo. I visited six alternative universities:

I wrote about three of them here. In this article, I will look at the overall experience and the ways in which I was impacted. After five months and thousands of km, I feel that I learned, I changed and I expanded in significant ways. I got to know Mexico through the interaction with hundreds of people that generously hosted me, shared their stories and their tortillas, invited me to parties, took me on hundreads of km roadtrips, gave me directions and answered my curious questions. To them, to the awesome mexicans I met, I’m grateful for the good times I had and for leaving Mexico a different person. Here are three ways in which this experience transformed and enriched me:

(1) In the footsteps of Freire and Illich
From the beginning of my journey, there were two powerful thinkers whose traces I wanted to follow: Ivan Illich – the maverick social critic of modern institutions and Paulo Freire the creator of the pedagogy of the oppressed. I wanted to see their ideas in practice. I was delighted to find both Freire’s ideas developed and actualized in Puebla at Universidad Campesina Indígena en Red, in the form of “pedagogia del sujeto” and Illich’s radical thinking taking a concrete form in Unitierra Oaxaca and Unitierra Chiapas.

These projects work in rural and indigenous communities and are similar in their aims but slightly differ in approach. Seeing them in their context greatly enriched my thinking. I was inspired to see my future work in a rural context, creating learning environments that help people oppressed or ignored by the system build their autonomy, reclaim the dignity of their lives and defend their lands and livelihood. More than that, I see these people being able to inspire everyone else that another world is possible. I switched my focus from “learning spaces” to “being spaces” that have learning as a core process. I see myself designing a nation or a village rather than a school. I had a glimpse through Unitierra at the potential of informality and destructuring learning structures like diplomas, curriculums, professions. Through UCI Red, I came to appreciate and live the “fecundity of the encounter” and to value the idea of meeting people where they are, offering, for example, diplomas if that is what they want. I got to understand the two approaches as being beautifully complementary. And I got to see education, or better said learning, as a deeply political act.

(2) Learning Architects as models of being
I’m always in search of role-models – people that by their way of being stimulate and inspire my own becoming. Mexico was generous with role-models. I will mention a few who’s living example will nurture my process of becoming a better learning architect:

To Victoria I’m grateful for being a joyful, curious and voracious learner, a generous learning partner and inspiring in me the joy of living and learning.

To Doris & Oscar I’m grateful for being an example of choosing a life of service and generosity, looking at people with infinite kindness and cultivating a humble force.

To Benjamin I’m grateful for being a genius in disguise, searching deep in philosophy, synthesizing and creating powerful ideas at the same time with being beautifully alive and humane, funny and hospitable.

To Gustavo I’m grateful for the strength and dedication in keeping alive and embodying a radical thinking model that the world needs and for the clarity of the worldview from which it springs.

(3) Zapata vive!
The plutocratic condition of the world walks without the mask in Mexico and I stared at its ugly face. There are everyday things like the aberrant highway fees making it so that the rich and the poor even drive on different roads, not to mention going to different schools and living in different neighbourhoods. Beyond the everyday inequality, a climate of violence came through many stories I heard, especially a brutal repression against people resisting the system. Nine people were killed in teachers protests in Oaxaca this year and two years before 43 trainee teachers were disappeared in Ayotzinapa. “It was the state” said a huge message displayed by Roger Waters in his concert in Mexico City, reflecting what most of the people I talked with think about Ayotzinapa. These two examples illustrate a general climate of brutality in which some brave people find the strength to resist and fight back. They say “Zapata vive, la lucha sigue” in the face of this brutal and out of control system. At enormous risk, with few material resources, people organize and resist. Marching with the teachers against the neoliberal reforms, hearing about the takeover and self organization of the town of Cheran, the zapatista movement, the Oaxaca commune in 2006 was like drinking from the fountain of hope and courage. After 500 years the colonization continues and the resistance is there, teaching the world to resist and to hope. 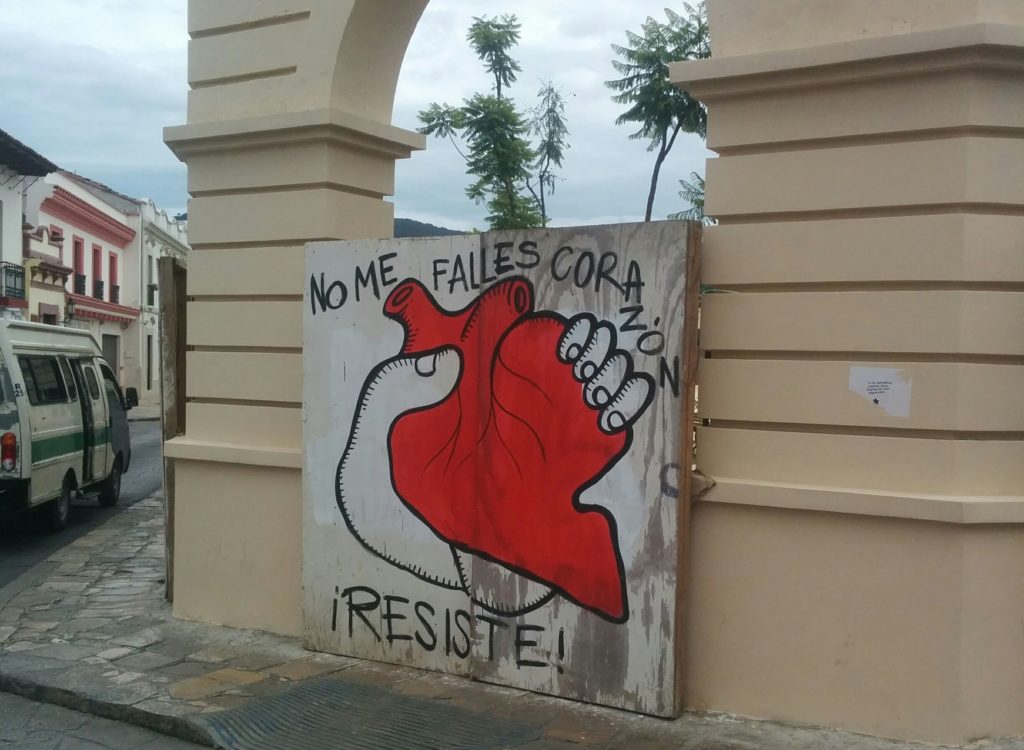 I said goodbye Mexico with gratitude and nostalgia. There is so much more to discover and learn and there are so many noble fights to fight. I hope to be back soon. Thank you Mexico for this first round!

One thought on “Three ways Mexico impacted me”