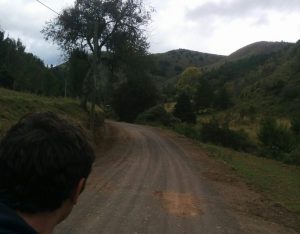 The directions I got from Benjamin were minimal. I prefer a little adventure of discovery instead of a precise script to follow. I took a bus from Puebla to San Miguel Tenextatiloyan, jumped to a “colectivo” that left me in the center of Zautla – a village of a few hundread inhabitants. From there, I walked 20 minutes to CESDER – Center for Studies for Rural Development. Halfway through, the stone paved road ends.

It’s friday afternoon, around five, when I walk through the main gate. No-one seems to be around. Maybe Benjamin didn’t call and everybody left.

Eventually, I get to the last building up the hill where the offices are. I have my list of four people from Benjamin. Rosy is there but she does not apear to be expecting me. Actually, I’m used to not really being expected. Even if they know I’m coming, they don’t really know what to do with me. We have to invent our way. My first concern is to make people confortable with my presence, let them know I will blend in by myself and need no special attention or special arrangements.

Rosy was unsure what to do with me. I was going to be there in the weekend when everybody would go home. The worst was not bad at all: I would spend two days in the library. But I was hoping I would get more “real life texture” of the place. I was hanging around the offices when Nachita and Irma joined the conversation. I vaguely knew them from the last time I was there. Both were students at CESDER before becoming part of the team. Nachita is a partner now. Speaking with them, it turned out that there was not much going on at CESDER but they were joining a training in another village, two hours away. It was related to the defense of territory.

Friday night Nachita came by to the guest house just to throw some old food and we ended up chatting for 2-3 hours. Nachita is an indigenous woman, in her 50s. She has one son and one doughter. Her husband left home to bring more money so the kids would go to college. Both of them graduated from college but Nachita’s husband found another woman and did not return. The doughter had two bad work experiences in a row. She worked for a agency that was managing government funds. She was supposed to go to a village but there was one engineer in the team that said “There is narco there, it’s too dangerous for you. Let me go to this one.” Both this engineer and another one working in the same village were killed by the narcos. Now she has a boring job in an airport. The engineer had a family and Nachita’s doughter had to make peace with the thought that is was her who was supposed to be there. Her son had a job also in the state of Jalisco. He was supposed to be a mechanic but he was often sent to get the repaired cars back to the clients. When he was coming back from a cliend, on foot, three guys assaulted him. He ran, one of them reached him and started kicking him. Before the others two got to him a lady with a car stopped and picked him up. She saved his life. He got back to Zautla. Nachita really appreciates that Zautla is a peaceful community, unlike many other places in Mexico.

Nachita is a great storyteller. She teleported me in a place where 8000 people gathered from 32 communities in Zautla Municipality. They dragged the chinese out of their offices to give count of the mining operation they were looking to start. The municipal president was leading the group. One engineer from the company said that they have a permit from the president. People were angry. They could lynch him if this was true. He challenged the engineer to bring the permit. He said he has it on computer so some of the people escorted him to an internet cafe to print the permit. He was red and could barely read what he printed. It was not a permit. On the spot, the company got a 24 hour ultimatum to get out and they did. They won that time but the neighbouring municipality, where Nachita was born, faced the same problem: a chinese mining company, threatening their water. This time, it was not that easy. There were 128 communities in this municipality. She went in a caravan with Irma, a coleague from CESDER, from village to village, paying the gas from their own pocket. Some people were being suspicious: why do you care so much? Who is paying you? In time, they learned how to react. There were also good experiences. One time, learning that they pay the gasoline themselves, an old woman folded her sweater and started collecting money from the assembly. Eventually, they only made it to about half of the villages.

I loved listening to Nachita’s stories, especially about their fight to protect the territory. The next day, Saturday, we would go to a training related to the defense of the territory. I met Nachita at eight in the morning, took a silver van from CESDER, picked up Rosy, Irma and her three doughters and drove 2 hours to a town called Cuetzalan. Irma was wearing a t-shirt saying: “Water is more precious than gold”. There in Cuetzalan there was this cooperative of coffee producers, one of the oldest. Their training center – a two story building – was hosting this program. The large hall at the entrance was also an expo of the products the cooperative makes: bags of organic coffee in the middle, some traditional blouses, shampoos and body creams, some sweets.  From the hall we entered one of the two rooms where an U shaped row of tables were expecting the 12-15 people. Without any introduction, we started listening to a 2h audio program about the last year and a half leading up to Ghandi’s death. After the program, the two facilitators, Sonia and Leo, were presenting a proposal for the follow-up. This Saturday was the last meeting of a longer program about Ghandi’s non violent approach. Unlike the previous gatherings when they would discuss after hearing the audio program, this time they planned the follow-up. People in the room would be multiplicators, they would air the program to community radios in shorter pills and they would have a bigger event in October. The meeting ended in this planning note and we got back in the van and drove another 2 hours back to Zautla where we got around 17:00 in the afternoon. At the last gas station we split the gas money in fours. It was 100 pesos (5 euros) each.

There seems to be nothing extraordinary about this story. Yet, from the persepective of my search, this corner of reality is shining bright. Irma and Nachita were students in CESDER – “a school for the poor”. The way they choosed to spend their Saturday means a lot. I remember visiting the social entrepreneurship center of Middleburry College, a fancy liberal arts college that costs 60.000$ per year. I have little hope from the Middleburry students to stir the world into a different direction. Why would they when the world is working good for them? But if the people who experience the injustice of the world could do that … and if a school that costs 500$ / year and where students pay 50$ / year could nurture changemakers? What if instead of dreaming to integrate in the society we have, they would build a piece of a different world? Nachita and Irma stayed in their village, found meaningful work there, developing the community. When facing the chinese company, they are representing a logic that the world needs. When they sacrifice their time and the few material resources at hand, they show a strong clarity on what is important for them and their community. Irma’s girls see their mom wearing the activist t-shirt saying that water is more valuable than gold. When they win against the chinese company they are the David defeating the Goliath Profit Machine. The dignity, will, clarity and humbleness of their fight “por la vida” as they say is what the social entrepreneurship center of Middleburry can’t begin to replicate. But things from CESDER can be replicated. The meaning of this indistinctive Saturday in the life of Nachita is hope and a question: how can we get more of these Satur/days?