I was born in the final decade of the Cold War, in a communist country of the Eastern Bloc. I lived most of my 33 years in its capital – Bucharest. When the time came to go to university, Romania was a ten year old democracy. I had a small ambition that looked like the Everest to me: a million dollars. I choose to study electrical engineering at Polytechnic University of Bucharest. In my second year there, I got carried away from engineering and the million. I was trying to make a website to express my growing dissatisfaction with the university. I seeked help at the student union and ended up joining. We made that website. A few months later, I was organizing a student protest. Marching among the 2000 students, I was giving voice to my deep outrage that we, the students, decide so little about our own education.

That first year as a student activist was followed by the second, and third and fourth and finally the fifth. The rage was morphing into a passion for  “student centered universities”. Our projects got sharper but no university was becoming more student centered thanks to our efforts. The learning was priceless though. 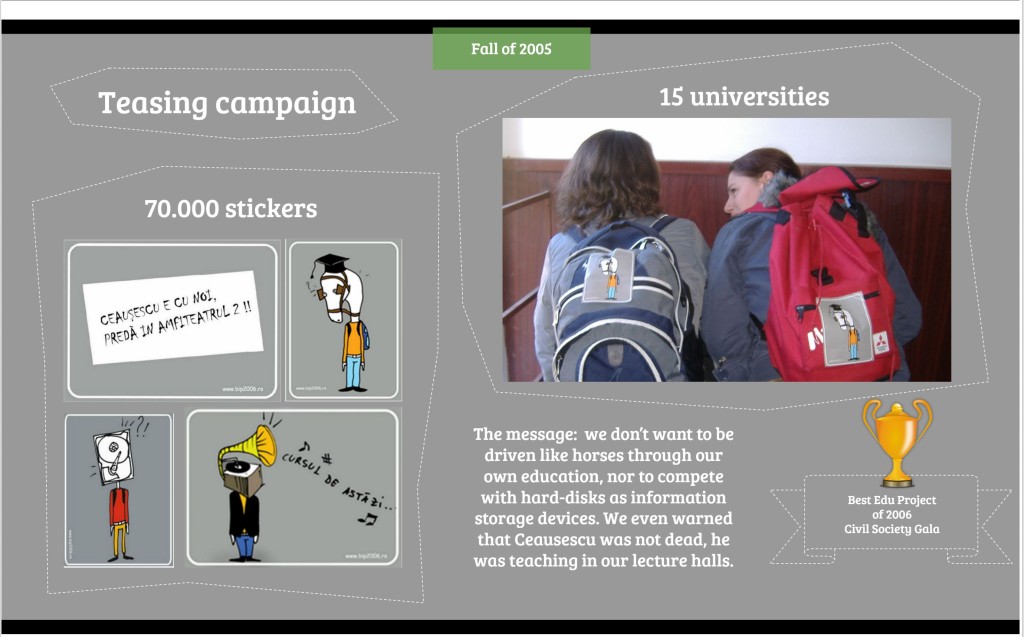 After graduating, five of us set out to create that student centered university we’ve been asking for; all of us former student activists no older than 25. We had nothing. Unreasonably underaged for such a venture, we finally started with a 4000 euros Youth in Action project. Bringing the idea to life kept us working overtime for the 7 years that followed.

One quiet street in Bucharest, close to Piata Romana, ends in an old villa hosting a small student centered university. There are 150 students enrolled, every one of them creating her own curriculum. You’d be surprised to hear they don’t get a diploma although the tuition is twice the average for a regular private university in the city. You would find it refreshing that young people engage with reality as a primary source for their learning by running their own NGOs and creating their own businesses. Put your social glasses on and you’ll see a web of 1-1 relationships of mentorship, coaching and counseling alongside courses, workshops and events. There are no full time teachers. Instead, more than 150 professionals volunteer a small fraction of their time. 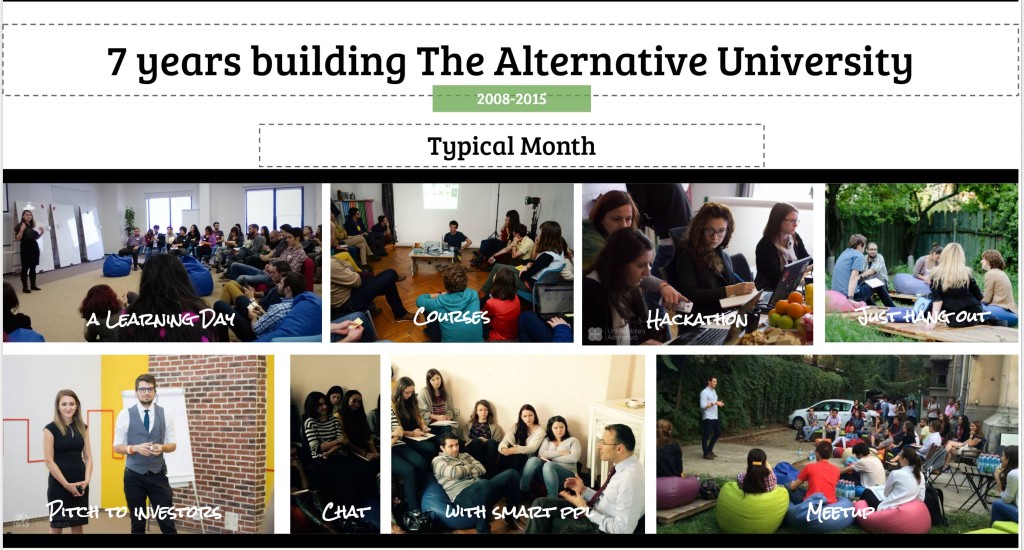 A british friend described it like this: “A university RUN by students and ex students. Where there are no qualifications. People direct their own learning. Everyone’s a student and everyone’s a teacher. A place built from the love of learning. A place exuding hope that we — the people — can take control of our destiny.” 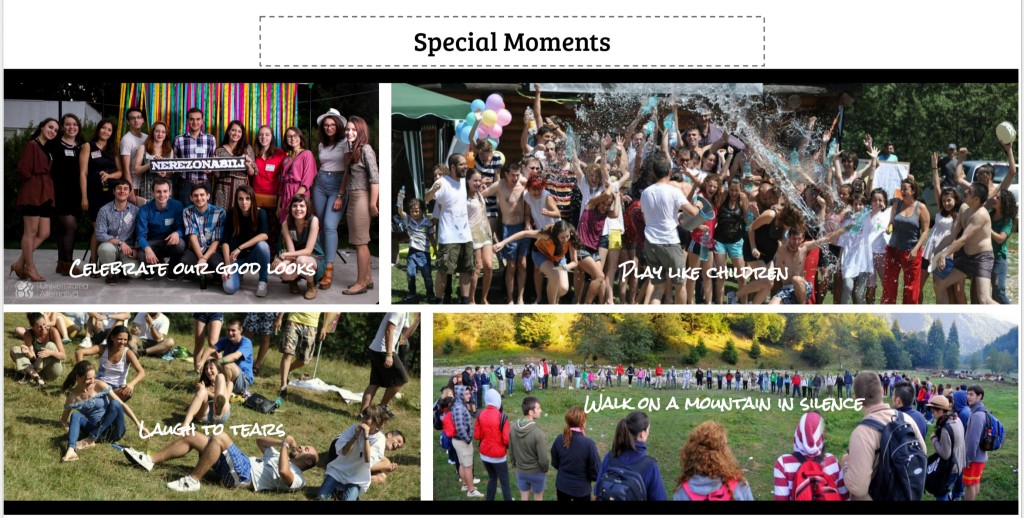 Others point out that it is too small and too different to be significant. But precisely being small makes it significant for the people involved. It allows it to be a community. I see it valued as an oasis with more freedom, kindness, courage or play in the air. Some people say it gives them hope. It’s not perfect. Not even close. Some days it just sucks. But there are days when it shows all of us how uplifting freedom can be.

The fact that something so different survives in our educational monoculture is a statement: more “divergent” things are possible. And they are coming. Independent projects like Learnity, RestartEdu or Entrepreneurship Academy have a few of their roots there. They will spread the freedom-DNA further. We’ve seen people taking ideas to their student organizations or workplaces or to their own businesses. So I dare to say that The Alternative University is also significant beyond the small community it gathers: it is a platform for seeding freedom-centered learning and work in Romania. And hope.

I lay back on the chair. A long exhalation expresses my delight. A triumphant smile probably gives away my foolish vaingloriousness. I didn’t know there was a word for such moments of “glorious” vanity. I let myself enjoy it for a while, like a McDonald’s ice cream with two extra toppings of caramel. We did it! The seed planted a long time ago turned into a nimble tree bearing its first fruits. 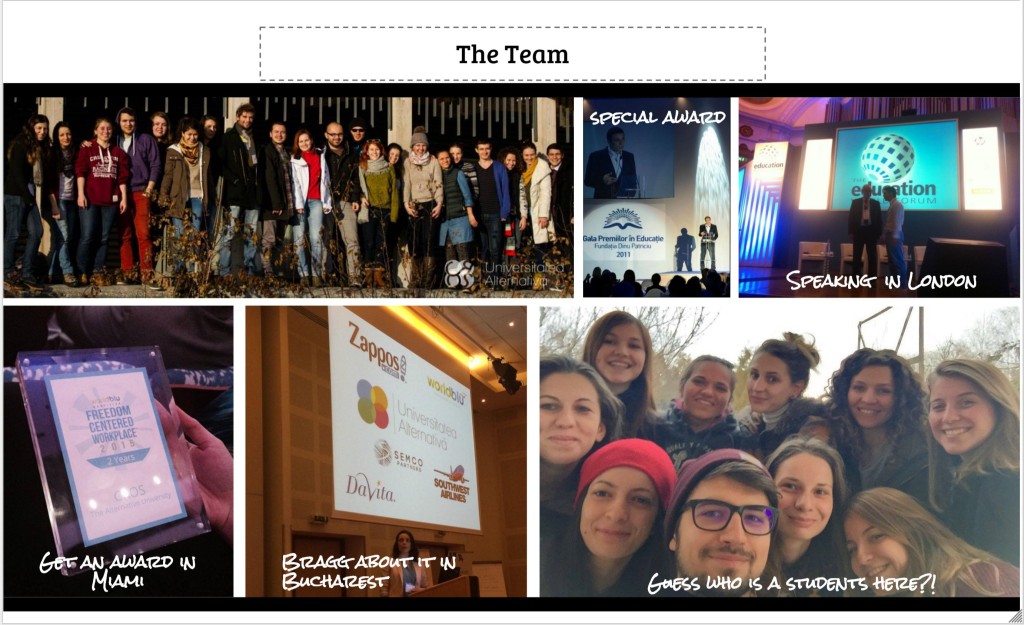 The decision to go

As the nimble tree bears its first fruits, I am packing my bags. I am amazed that we did it. The many flaws I’m used to seeing pale in light of the curious reality that the Alternative University exists. My thinking all along was romania-centric. But I came to believe that the only meaningful way forward is to join forces globally. The changemakers we hope to nurture face global systems that create both local and planetary problems. The resources and the inspiration to solve them is scattered worldwide.

I felt myself in many ways unprepared for that. The university was not yet sustainable. My english was bad. The list goes on. Thinking about taking a break, I realised that it might prove refreshing not only for me. People I’ve spent years working with could probably learn more by my absence than by my presence. And I could do all those things I craved for. Stop and just do nothing for a while. Learn kitesurfing. Read a lot. Order my thoughts and write. Become mindful, maybe even spiritual. Unlearn my old way of being in the world so I can make space for something radically better. Everything clicked. I could travel around the world for a year and write a book. It was frightening enough to be irresistible. I didn’t fear going, I feared leaving too soon. The team said yes. I started burning the bridges by telling everyone.

See the story unfolding and on the Indiegogo page